In October 1950 Sadie Walton put an ad in the paper announcing a Quaker Meeting for Worship to meet at her and Harold’s home.  The Cowgill sisters, Agnes Smith, Binnie and John Avery were among the first to respond.  By 1953 there was a fledgling monthly Meeting for Business and it was meeting at the University Women’s Club as guests of regular attender Margaret Fritz. The budget for the year was $100 and there was no First Day school.

On October 3, 1954 an installation meeting was held and we became a “proper” monthly meeting with 22 members and attenders (including the Averys, Throns and Waltons).  The first official Clerk was Gladys Lindes, followed in 1955 by Wolf Thron. Committees included Ministry and Counsel, Peace and Service, Social, Adult Religious Education, First Day School, Family Camp and Publicity.  The first set of queries for Boulder Meeting were written and adopted.  In 1956 several other families joined and a First Day  School was started in collaboration with the Unitarians.  In 1957 an adult discussion group was started  and there was a sewing group for AFSC service projects.  In 1959 the bill permitting Friends’ marriages became law. During the 1950s meeting and First Day school moved several times, first to different homes and then to rented spaces.  At the end of the decade the Meeting had 24 members over 16 years old, 17 members under 16, and 15 attenders. 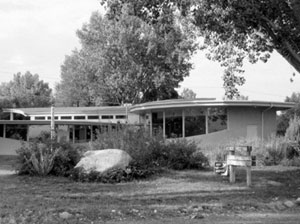 Photo of our meeting house.

Early in 1960 after long and careful deliberation (and trepidation, considering the size and resources of the group) the Meeting for Business decided to buy the lot owned by Donald and Eloise Smith (later Ristad) on Upland Avenue and build a meeting house.  A building committee was appointed with Jack Kraushaar as convener.  Charles Haertling was hired as architect.  His fee was so low that his service clearly was a personal contribution to the Meeting.  The original footprint consisted of two pods, the meeting room (about half the size of the present one) and the First Day school room (some eastern Friends where rather put out by the unconventional shape of the building).  A 10-year loan of $10,500 was obtained, and about 2000 hours of volunteer labor was put in by the Kraushaars, Throns, Waltons, Averys, Gottliebs, Micheners, Traibushes, Bakers, Smiths and a few others.

In 1963 the Meeting incorporated as a non-profit organization. The five trustees who signed the document were Sarah (Binnie) Avery, Jack Kraushaar, Sidney Ostrow, Wolfgang Thron and Harold Walton. There were 39 members over 16 and 51 children in First Day school (they sometimes met down the street at the Smith house).  In 1964 a community outreach fund was established as a resource for witnessing concern for human needs.  In 1965 we “adopted” the Carter family from Merigold, Mississippi.  Their seven children integrated an all-white school and thus the parents had a difficult time getting employment.  We continued their support until all children finished college in 1982.  All during the early years there was concern about survival as a Meeting.  There was a lot of turnover, people coming and leaving, and the core group was not very large. At times the number of children and Meeting house maintenance seemed overwhelming.

In 1966 the Gottliebs moved to Carbondale and the Gottlieb lectures were established in appreciation of their contributions. In 1967 Iris and John Green started the Upland school in the current fellowship room (this school continued until June 1988).  In the late 60s there was much concern with the Vietnam war, draft counseling (had ad in Camera offering information), and the treatment of “hippies.”  The meeting was expanding and the building became very crowded. There was much soul searching about the financial feasibility and moral rightness of spending money on expanding it.  But at the end of the decade a special Meeting for Business agreed to expand the Meeting house.

The 1970s – Action on Social Concerns

During the summer of 1970 the meeting room was expanded by moving the northeast wall back, and a new wing, which became occupied by New Horizons school, was added. The addition cost $22,000.  The money was loaned by meeting members and the building committee was headed by Arthur Bell.  Our regular budget that year was $14,100.

In the early 70s Meeting was concerned with draft counseling and the support of conscientious objectors as well as of the United Farmworkers.  It helped organize a communication center on the Hill in response to anti Vietnam War riots, gave a substantial donation to help the People’s Clinic buy a building, and continued support of the Carter family.  In 1974 there were so many members and attenders that we started the extended families to enhance community life. One of the original extended families survives to this date and many others have been started (while some have disappeared). We also affiliated with Intermountain Yearly Meeting that year.

In 1976 we had 107 members and held a 25th anniversary celebration.  The annual Fall Gatherings at the Powelsons’ cabin started. We sponsored the Santos family, a Chilean refugee family (Esteban was a political prisoner) to come and settle in Boulder. The family continued living in Boulder and their two older girls graduated from college.  In the late 70s Meeting was concerned with the Chilean situation and worked with Amnesty International; it also took part in demonstrations against nuclear arms, organizing walking and car caravans to Rocky Flats.  We collected fabrics for a sewing project at the Pine Ridge Reservation and supported, with 10% of our budget, the purchase of emergency housing (which later became Echo House, where we continue to be responsible for one apartment).  The budget these years was $14,000 – 16,000 and there was concern that at least half of it be always for outreach.  The process to revise the 1955 queries started in 1978.