Children in Kickapoo Village, Oklahoma, circa 1890. Friends ran Indian day schools and boarding schools here and in about thirty other locations.

During her tenure as Pendle Hill’s 2016 Cadbury Scholar, Toward Right Relationship project director Paula Palmer is conducting research on the role Quakers played in conceptualizing, promoting, and carrying out the forced assimilation policies of the last two centuries. This policy was succinctly expressed by Merrill E. Gates in 1891:

“We are going to conquer the Indians by a standing army of school teachers.”

The intention of Paula’s research is to lift up the history of the Quaker Indian boarding schools so that Friends can reflect on its consequences for Native American communities and its meaning for the Religious Society of Friends today. What role will Friends today play in the movement for truth, reconciliation and healing?

If you can offer information, resources, or contacts to contribute to this research, please contact Paula at paulaRpalmer(at)gmail(dot)com. Thank you! 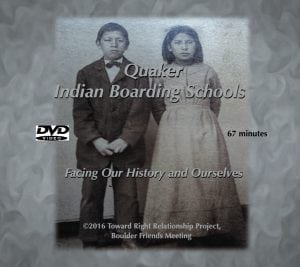 The Toward Right Relationship Project has produced a Video, which includes two presentations:

2- “The Quaker Indian Boarding Schools: Facing our History and Ourselves” a slide presentation by Paula Palmer (56 minutes)

If you would like to receive a DVD of this video, please send a check for $18 (to cover costs of reproduction, postage and handling) to “Boulder Friends Meeting,” and in the memo line write “DVD.” Mail your check to:
Paula Palmer
1603 Cottonwood Dr., Unit N
Louisville CO 80027.

Listen to an interview with Paula Palmer about the Toward Right Relationship with Native Peoples workshops and her research on the Quaker Indian Boarding Schools, on Northern Spirit Radio.

“He Can Fancy Dance” by Cindy Paul

The Quaker Role in the Indian Boarding School Era

Quakers, as individuals and as monthly and yearly meetings, were instrumental in conceptualizing, crafting, and carrying out the cultural assimilation and Indian education policies of the U.S. government during the 19th century. They proposed the policy that became known as the Grant administration’s “Peace Policy” or “Quaker Policy.” The goals of this policy were to replace the government’s corrupt Indian agents with religious men who would oversee management of the reservations, convert the Native people to Christianity, and settle them into farming lifestyles like those of European Americans. They would educate the children in Christian doctrine, the Three R’s, and practical skills (farming, animal husbandry, homemaking, etc.), turning them away from their Native cultures and communities and toward European American lifestyles. The Grant administration put Hicksite Friends in charge of six reservations with populations totaling 6,598 people. Orthodox Friends managed ten Indian agencies whose populations totaled 17,724 people. Other Christian denominations managed 56 additional reservations during Grant’s presidency.

Consequences of the Indian Boarding Schools for Native Families

The church-run day schools and boarding schools varied greatly in the levels of physical, sexual, and emotional abuse that the children suffered, but all the schools pressed children to abandon the cultural and spiritual traditions of their parents and adopt the identity and ideologies of the dominant European American society. The off-reservation boarding schools inflicted the most lasting harm. Of these boarding schools, the Native American Rights Fund wrote, “Cut off from their families and culture, the children were punished for speaking their Native languages, banned from conducting traditional or cultural practices, shorn of traditional clothing and identity of their Native cultures, taught that their cultures and traditions were evil and sinful…. They returned to their communities, not as the Christianized farmers that the boarding school policy envisioned, but as deeply scarred humans lacking the skills, community, parenting, extended family, language, and cultural practices of those raised in their cultural context.” There is mounting scientific and testimonial evidence that the trauma suffered by Native children in the boarding schools could be passed from generation to generation through social, psychological, and neurological processes, and that Native families and communities today continue to suffer from these wounds.

A Path Toward Truth, Reconciliation, and Healing

Native American organizations and communities are developing healing processes that draw on their own traditions as well as mental health modalities. The National Native American Boarding School Healing Coalition is urging the churches that were involved in the boarding school era to consider how they might contribute toward these healing processes. As a first step, they are asking churches to undertake research into our own histories in the Indian boarding school era. They see this research as an essential first step — truth telling – in the truth, reconciliation and healing processes that they envision. See their “ Call For Papers: Churches’ Roles in the History and Continuing Impacts of the Boarding School Policy of the 19th and 20th Century.”

The Toward Right Relationship Project responded to this call when Paula Palmer successfully applied for the Cadbury Scholarship, a research grant that provides room and board at Pendle Hill for 15-18 weeks. Paula’s research project is endorsed and supported by the National Native American Boarding School Healing Coalition. The Coalition hopes that this Quaker project will provide a model for other church denominations to follow (see their letter of recommendation).

Paula conducted bibliographic research while sojourning at Pendle Hill, September-December 2015. She seeks to understand the roles American Quakers – individuals, yearly and monthly meetings, and organizations – played in conceptualizing, promoting, financing, managing, and teaching in schools for Native American children. The Quaker History Collections at Swarthmore and Haverford Colleges house primary sources (journals, letters, monthly and yearly meeting minutes, committee minutes, etc.) that reveal what motivated Friends to involve themselves with the federal government in developing and carrying out policies for Indian education and cultural assimilation. Paula’s research focuses on these questions: How did Quaker faith and practice during the 19th century guide Friends’ thinking about the best “solutions” for the country’s “Indian problem?” How did they conceptualize and express the desired outcomes of the cultural assimilation policy and the Indian boarding schools? On what basis did they evaluate the Quaker-managed schools’ impacts on the Native population – the students themselves and their families and communities? What did Quaker teachers, administrators, monthly and yearly meetings learn from their experiences in educating Native children and living among them? How did their thinking and their actions regarding the realities and rights of Native peoples change through the 19th and early 20th centuries, and how did they relate these changes to their Quaker faith and practice?

Paula also conducted field research, visiting the sites of eleven Quaker Indian schools in Oklahoma, Kansas, Nebraska, and Iowa. For her report on these visits, see her Field Research Travelogue, September 2015. At the conclusion of her research, Paula will write reports for the National Native American Boarding School Healing Coalition, submit articles to Quaker and other publications, develop a power point presentation for Friends meetings and organizations, and write papers for presentation at academic conferences, including the November 2016 conference on Quakers and Native Americans.

Paula is available to share the results of her research with a powerpoint presentation called, “The Quaker Indian Boarding Schools: Facing Our History and Ourselves.” To request a presentation, contact her at paulaRpalmer(at)gmail(dot)com, or call 240 595 5993.

The Toward Right Relationship project needs financial support to:

To make an online donation, click “Donate”, then enter “Toward Right Relationship” in the Purpose box.

Learn more about the history and legacy of the policy of forced assimilation of Indian children through the boarding schools. Share what you learn.

Western Friend Interview with Paula Palmer: Quakers and the Forced Assimilation of Native Americans
Unabridged Interview with Paula Palmer, by Western Friend, July 2015
Canada’s Forced Schooling of Aboriginal Children Was ‘Cultural Genocide,’ Report Finds – The New York Times
Reconciliation Will Not Be Realized Until We Live Up to Past Promises – Huffington Post
What Good is an Apology? – Common Dreams