At the Spring, 2013 University of Colorado Commencement, Gerald One Feather, longtime friend of the Boulder Friends Meeting, was awarded an honorary doctoral degree for his outstanding contributions to Lakota education and other areas. 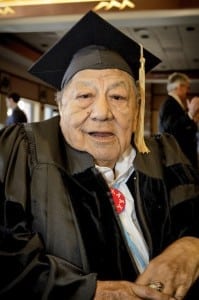 One Feather
Photo by Sean Cridland

In an additional ceremony, held by the Department of Sociology at CU, Dr. Richard Williams gave One Feather the highest Native American honor – an eagle feather and a Pendleton Blanket. Dr. One Feather thanked the University of Colorado and Quakers for their important support of his work.

In 1970, 31-year-old One Feather was the youngest person to be elected Oglala Lakota tribal president. Knowing that education was critically important for the future of his people, One Feather began the creation of the Oglala Lakota College on Pine Ridge Reservation. Working with faculty members in the department of sociology at the University of Colorado, where he had been a graduate student in sociology, One Feather established a model for American Indian education that inspired the creation of 26 tribal colleges around the country. In 1972, One Feather was also a founding member of the American Indian Higher Education Consortium and served as its first President. 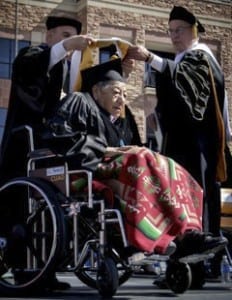 In 1988 when One Feather accepted the invitation to join the American Friends Service Committee (AFSC) staff, his tasks included the leadership of the Lakota Oyate Oaye Program, which in Lakota means, “The people moving together.” The core of the work was the restoration of Lakota spirituality, language and culture, through such activities as Spiritual Ceremonies for young people, a weekly radio show, and a language immersion.

One Feather added an international dimension to the work when he provided leadership in creating the Lakota, Dakota, and Nakota Annual Summits, which began in 1988 and focused on treaty rights and sovereignty issues in the United States and Canada. 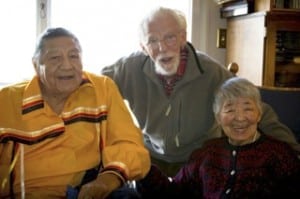 Three elders who have long been friends: Gerald One Feather, Martin Cobin, and Aya Medrud.
Photo by Sean Cridland

Through his work with AFSC, One Feather made important connections with people from the Boulder Meeting of Friends.

Now in his mid 70s, One Feather still serves his tribe and others. He is a member of the Oglala Lakota College Board, and he is on the graduate advisory committee. His great contributions are recognized with an endowed chair at the college in his name. 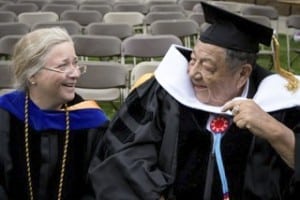 Liane Pedersen-Gallegos, a long time supporter of Gerald One Feather and his work, shares a moment of relaxation with him after the ceremonies.
Photo by Sean Cridland 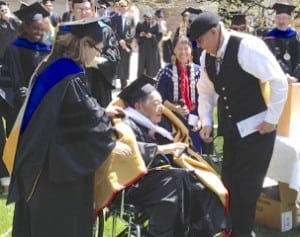 Gerald One Feather at CU Boulder where he is honored with an eagle feather and blanket.
Photo by Jane Westberg 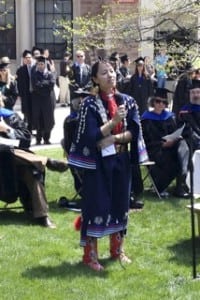 Sandra One Feather speaks about her father and his work.
Photo by Jane Westberg 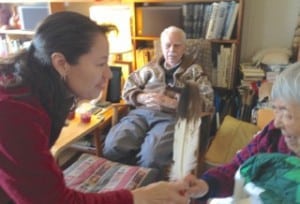 Sandra One Feather honors Aya’s friendship and contributions with a feather and a Lakota star quilt blanket.
Photo by Sean Cridland