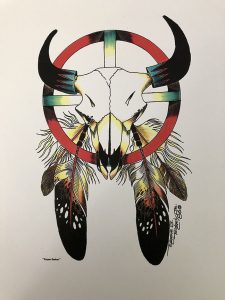 Boulder Meeting of the Religious Society of Friends acknowledges that we live and worship on land where Indigenous Peoples have lived for more than 13,000 years. Chief Nawath (Left Hand) and his band of Arapaho were living in the Boulder Valley under the terms of the 1851 Treaty of Fort Laramie when gold was discovered in 1858. The Arapaho were forced out of the area, contrary to the terms of the treaty, and a fort was built to protect the booming towns of Boulder and Valmont. In 1864, volunteer militiamen mustered at Boulder’s Fort Chambers and joined U.S. Colonel John Chivington’s forces in carrying out the Sand Creek Massacre. More than 200 Arapaho and Cheyenne people, including Chief Nawath, were killed.

We lament this history of land theft, betrayal, murder, and displacement, knowing that we have become its beneficiaries. We acknowledge Indigenous Peoples’ enduring love for this land and the valuable contributions they make to our community today. We seek ways to build relationships with them now based on truth, respect, justice, and our shared humanity.

*The above painting, “Prayer Seeker,” by Northern Arapaho artist Eugene J. Ridgeley, Jr., is a gift to Boulder Friends Meeting in appreciation for our support of the 2012 Sand Creek Massacre Spiritual Healing Run.